I grew up going to a pretty charismatic church. Of course I didn’t know it at the time. I thought that everyone went to church for a minimum of 3 or 4 hours on Sundays. I also thought it was common for worship through music to continue for the entire service and even take priority over a sermon.

To this day I wonder if my love of worship and singing is a result of those services as a child or if those services just fostered a love that God had already placed in my heart. I like to think it’s a beautiful combination of the two.

Anyhow, fast forward to today. As an adult, my relationship with God goes through ups and downs. At times, we are talking constantly and I’m feeling so close to Him. Other times, I let things get in the way and we’re a little more distant. I wish it wasn’t that way but it just seems to be how it is for me.

Even during those times where I’m not spending as much time with Him as I should or that I want to, He always meets me in those songs of praise. I can physically feel Him. He usually speaks to me during those times, too. I know He can speak to us anywhere and anytime but for me, worship has always been more significant and extra special somehow.

So now I have my 3 kids. And the 2 youngest are just all about mom all the time. On a regular basis, I feel the Holy Spirit kind of nudging me in the back saying, “Go up front. Bow down at the altar. Lean in. Get close to Me.” Meanwhile I have at least one child on a hip and one sitting on my foot and I wonder if I heard Him right.

He can’t possibly want me up there right now. My kids will follow me. They’ll cry. They’ll be a distraction to everyone else. I won’t be able to really focus on Him. Then I’ll hear Him again, “Come on. Let’s go.” And I’m sure that I’m imagining things. He obviously can see me. He can see that my husband and I are struggling to contain them in the row and keep them as quiet as possible.

About 2 years ago I couldn’t ignore the pull and I did go up front. I pushed aside my reasons not to and just knelt down and worshipped and prayed and cried my eyes out. Honestly, it felt so good. One of the teens came over, knelt down beside me, asked if I was ok and if I wanted her to pray with me. “I’m fine!” I said. “Just worshipping.” I thought it was so sweet that she was checking in but it bothered me. It bothered me that she thought the only time I would weep at the altar would be during a time of crisis.

I wanted to say, “It should be the opposite. You should be asking me if I’m okay if I’m not up here. When I think about Jesus suffering and dying on the cross I want to just sit at His feet and cry and thank Him for hours for what He’s done. Not to mention what I have turned around and done with this gift He’s given me.

I’m selfish and lazy. I’m impatient and snarky. I’m not even close to being a Proverbs 31 wife. He did what He did and I’m not honoring Him with my life as much as I could. Not even close. I could be sprawled out on this floor for a week and not even begin to scratch the surface of how much I want to thank Him for the grace, protection and blessings He has poured over my life.”

So this morning was one of those mornings. I literally had a child on one hip and was trying to keep the other one from being too much of a distraction. I felt the Lord pulling, pushing, asking, whispering, encouraging me to go up front. And I said, “But God. They’re going to follow me up there and I won’t be able to focus on You.” And then I went anyways.

And you know what happened? They followed me. My hands were in the air and tears were falling down my cheeks. My 1 year old was in my lap but eyeballing the drum set. My 3 year old wanted to know why I was sad and was trying to pull me back to our seats.

I don’t have the best offering to bring to Him right now. I can’t pray without distraction. I can’t even get through a whole song without making sure my youngest hasn’t escaped out one of the back doors. But He loves them more than I do. He called me to be a mom. He knows better than anyone how tired I am and how much I need to rest in Him.

Guys, I’m not qualified to be writing to you about the goodness of God. I don’t have anything figured out. I’m here today to tell you that He doesn’t want you to get it all figured out before going to Him either. He wants us now. He wants to carry us. He wants us any way that we show up.

The Creator of the Universe has fulfilled and will continue to fulfill all of His promises.

He promises that He has plans for each one of us that include HOPE and a FUTURE. Jeremiah 29:11

He promises that if we go to Him when we’re exhausted and burdened, He will give us rest. Matthew 11:29&29

He promises that He’ll give us strength when we feel like we have nothing left. If we trust in Him, He’ll lift us up on wings like eagles! Is 40:29-31

He promises that He WILL supply all of our needs. Phil 4:19

He promises that absolutely nothing can separate us from His love. Not Satan. Not death. Nothing. Romans 8:37-39

He promises that, as His children, we will never be overtaken by temptation. He will always provide a way out if we ask Him for it. 1 Cor 10:13

He promises that everything that happens to us will work out for our good as long as we focus on being faithful to Him. Romans 8:28

This is the big one. He promises that if we simply confess that Jesus Christ is our Lord and Savior then we will be saved and get to live with Him forever. Romans 10:9

Just typing out that list makes me want to kneel where I am and say, “I know this isn’t enough but here it is anyway. Thank you Lord.”

My goal moving forward is to have my sweet friends at church wanting to know what’s wrong when I DON’T go up front and cry my eyes out. That’s when I’ll know I’m close to doing something right. 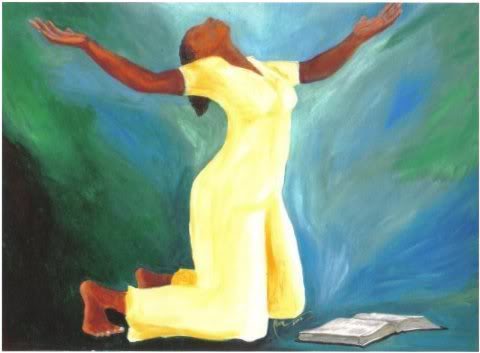 You anoint my head with oil;
my cup overflows.
Surely your goodness and love will     follow me all the days of my life